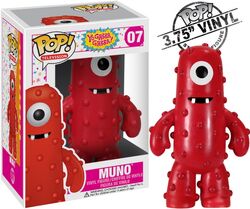 Muno is number 7 in Pop! Television. He is from the Yo Gabba Gabba! franchise.

Muno is a friendly male red cyclops. He's the tallest, is somewhat clumsy and has a close bond with Foofa (though she also bonds with Brobee in the same way). He is also the band's guitarist. In the episodes "Family", "Circus", and "Baby", his family makes an appearance. During Super Bowl XLIV, he appeared in a commercial for the Kia Sorento. His realm resembles the moon, another planet, or a desert and he has a pet horse. He has three stomachs as seen in the X-ray in the Season 1 episode "Halloween" (#13). However another X-ray in the Season 1 episode "Imagine" (#20) shows him with one stomach, a normal heart and lungs. His catchphrase is "Razzle Dazzle".

Retrieved from "https://funko.fandom.com/wiki/Muno?oldid=7795"
Community content is available under CC-BY-SA unless otherwise noted.