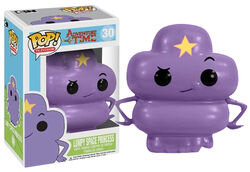 Lumpy Space Princess is number 30 in Pop! Television. She is from the Adventure Time franchise.

Lumpy Space Princess (or by her initials, LSP) is the princess of Lumpy Space. She has a very dramatic attitude. When Finn and Jake met her, they traveled to Lumpy Space to her parent's house after she bit Jake giving him lumps all over his body. She is not recognized by the chair of princesses and no longer the heir to Lumpy Space. She was banished from Lumpy Space and went to live in the woods on her own. She lived with wolves and started to threaten and terrorize villages for their crops. She goes back to Lumpy Space once in a while to see her family and lives on her own as a hobo. She is one of the main princess characters in the show along with Princess Bubblegum and Flame Princess.

Retrieved from "https://funko.fandom.com/wiki/Lumpy_Space_Princess?oldid=8696"
Community content is available under CC-BY-SA unless otherwise noted.