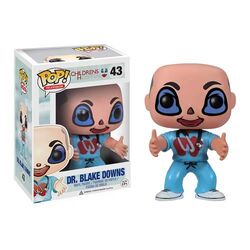 Dr. Blake Downs is number 43 in Pop! Television. He is from the Children's Hospital franchise.

Dr. Blake Downs is a doctor who wears clown make-up and surgical scrubs. He believes that the healing power of laughter is better than medicine. His status as a clown is frequently likened to a race. At the end of Season 4 in the show, he was killed but was revived at the beginning of Season 5. It is revealed that the hospital has clown doctor clones which has Blake Down's history taught. When one clone dies, another is activated to take it's place.

Retrieved from "https://funko.fandom.com/wiki/Dr._Blake_Downs?oldid=7963"
Community content is available under CC-BY-SA unless otherwise noted.