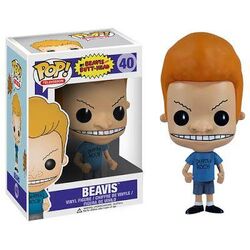 Beavis is number 40 in Pop! Television. He is from the Beavis and Butthead franchise.

Beavis "is a zero" when it comes to intelligence; indeed, Beavis is often oblivious to what should be obvious. Generally submissive to Butt-Head and willing to tolerate a large amount of physical and verbal abuse, Beavis nonetheless has limits. In "Murder Site", Beavis was driven to attack and nearly kill Butt-Head, who ceaselessly called him "Butt-knocker", a term which Beavis resents. Beavis also stood up to Butt-Head while they were watching the video for Rancid's "Nihilism": Butt-Head kept talking about it derisively, prompting Beavis to tell Butt-Head to shut up. When Butt-Head reacted with fury, ordering Beavis never again to tell him to shut up and threatening to attack him, Beavis preemptively kicked Butt-Head in the testicles, told him to shut up again, and walked out of the room to get something to eat. In another episode, while the duo were watching a Bon Jovi video, Beavis claimed to like one part of the song, causing Butt-Head to slap him in disgust. After being struck a few times, Beavis kicked Butt-Head in the groin and proclaimed "Bon Jovi rules!".

Retrieved from "https://funko.fandom.com/wiki/Beavis?oldid=7926"
Community content is available under CC-BY-SA unless otherwise noted.